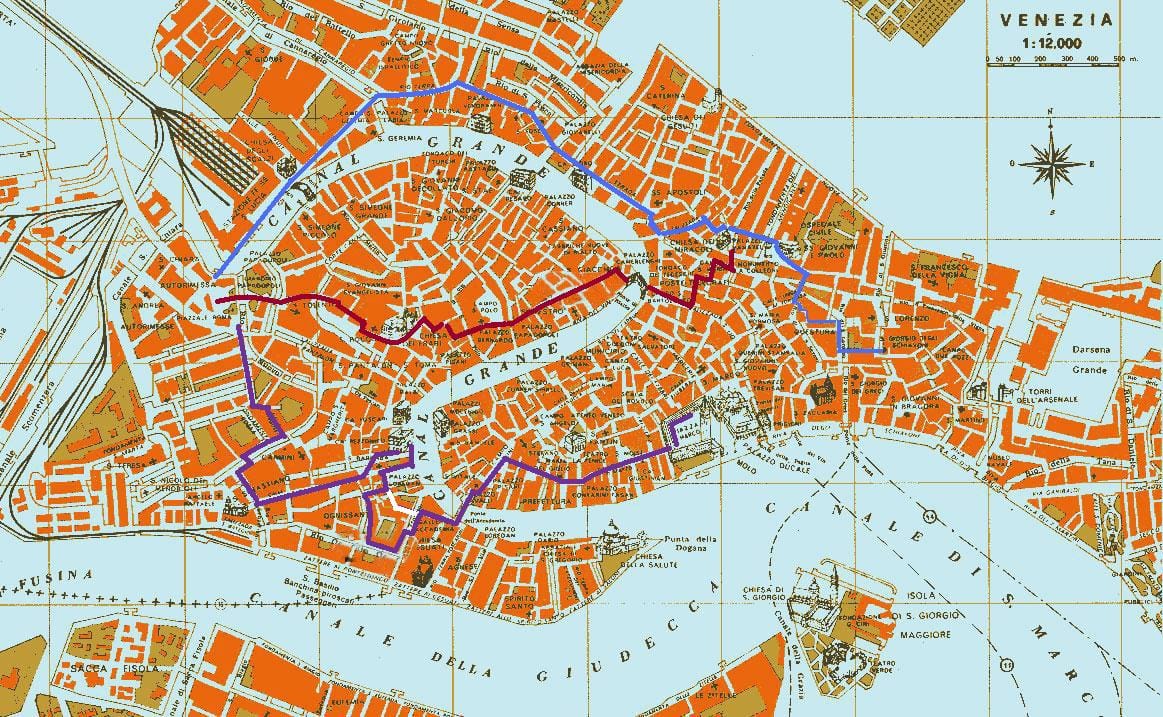 We shall start form Piazzale Roma heading to Rialto. We will see Santa Lucia church on our left, just after the train station.

As we said, the church was on the land that was to build the railway terminal, and therefore it had been scheduled for demolition in 1860. Then the body of the holy Saint was shifted elsewhere, precisely on July 11th, 1860.

Walking along Lista di Spagna, just five minutes away from the train station, on our right we will find the church of San Geremia and Lucia. 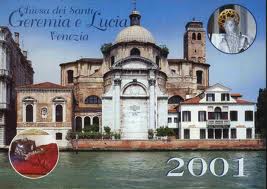 After the shifting took place, the sacred body remained on the high altar for seven days before being placed on a side altar waiting for the new chapel to be completed. It was built using the materials coming from the demolished presbytery, on a model by Andrea Palladio, and had been inaugurated exactly three years later, on July 11th, 1863. More details about the history of St. Lucia:
http://digilander.libero.it/santigeremiaelucia/storiasantalucia.htm

In 1935 the Patriarch Angelo Roncalli, who later would have been Pope Giovanni XXIII, and made Saint after his death, decided that the holy relics needed more attention and more care.
The status of the holy body was wonderful, but he suggested to make a silver mask that covered the face. The result was truly amazing: Lucia seems to be sleeping, eyes closed, her hair flowing.
She is dressed in purple and gold, the right hand comes out of the wide sleeves of her tunic, her head is resting on a cushion of Damascus and the body on a mat of yellow silk.

On the inside of the crypt you will see a beautiful painting of the martyr created by Jacopo Palma il Giovane. 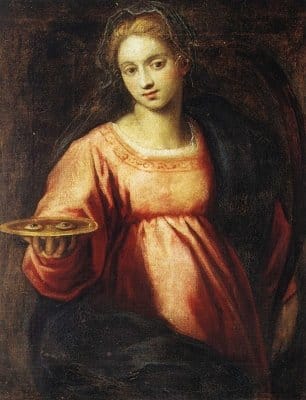 After the visit to Santa Lucia, our journey continues on Rio Terà San Leonardo and Strada Nova, before getting to Ca D’Oro. 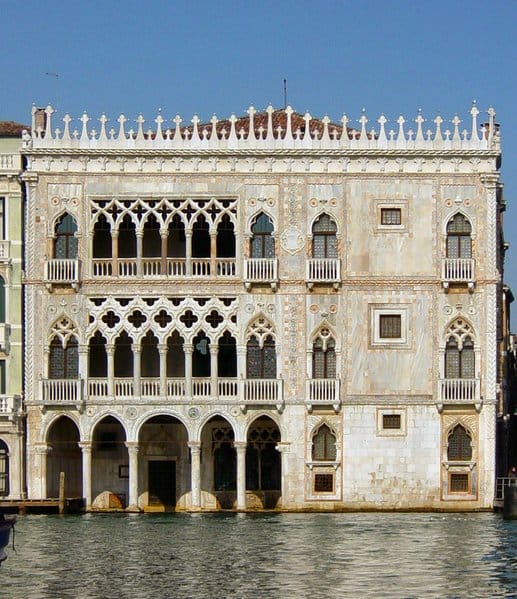 This 15th century palace, stongly wanted by the trader Marino Contarini, has this name as the facade facing the Grand Canal was covered in gold. Owned by the Baron Giorgio Franchetti, it was restored in 1896 to display his private collection of works of art.

This story reminds us of the actual change in ownership of Palazzo Grassi on the Grand Canal.

At Ca’ d’Oro you can enjoy the beauty of the place. On the first floor you can see, on a small paint representing the four doctors of the church, you will notice an arc frame on the nose of one of them.

On the top floor there is a poster showing some of the tiles that have been removed about fifteen years ago from the floor of the Annunciation chapel in San Sebastiano’s church. The removal was necessary to restore the church. The 348 tiles are now kept at Ca’ D’Oro, in the restoration workshop of the Superintendence of Fine Arts of Venice. We can date the tiles back to 1510, as reported on one of them even if the floor was probably laid in 1531. That is when the Lando family bought the chapel and the central area of the floor shows four tiles as the symbol of the surname. 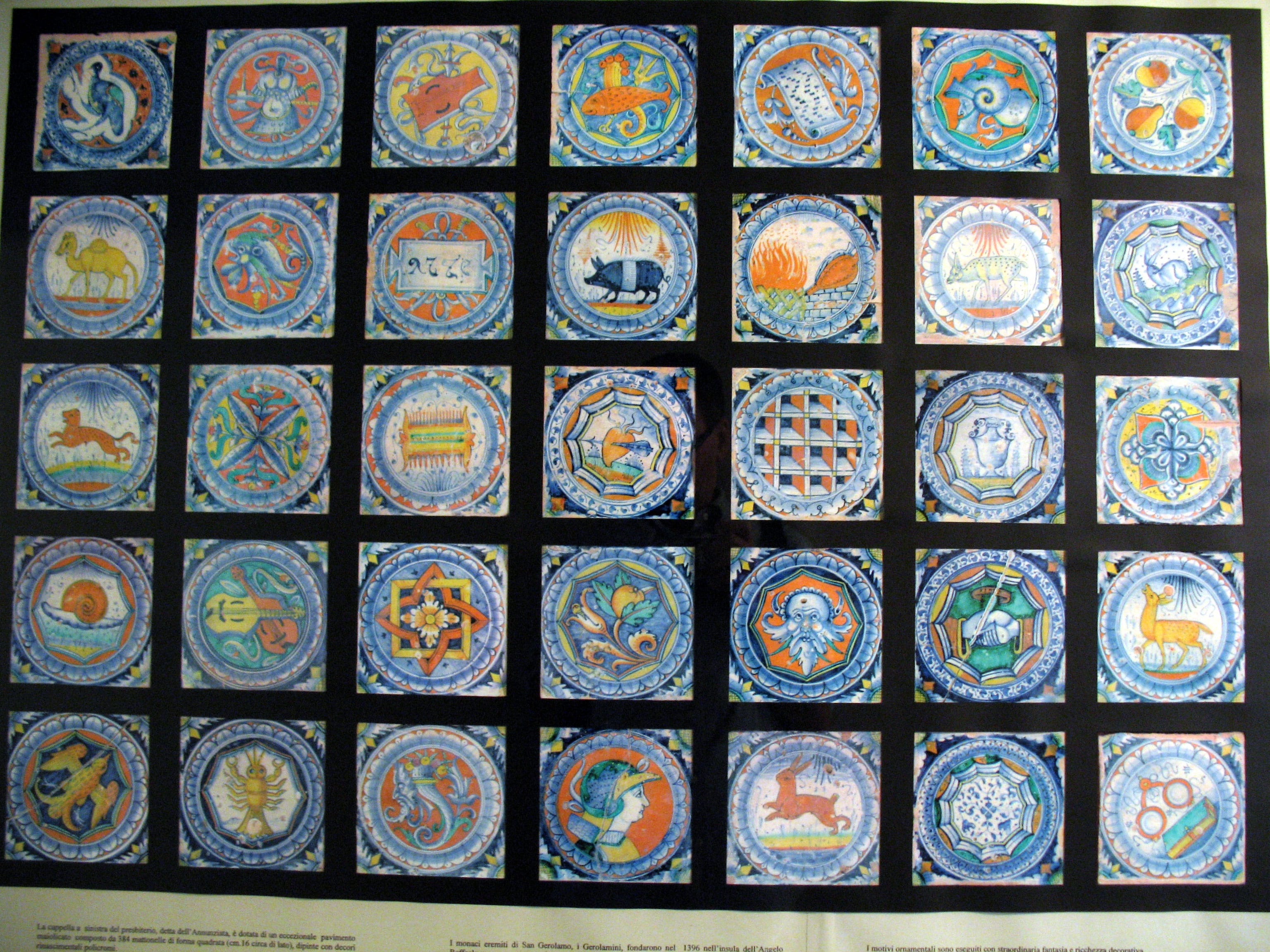 We can notice that, on the right low corner, a pin or “rivet” frame is placed on a 16th century book with closed hinges. The scientific object used as a reading aid is a meaning of culture and knowledge. This is just one of the two glasses on the floor and it is still the oldest representation of glasses on a tile. The attention to details, used to draw the glasses on the tile, allow us to make a comparison between this and another image in Venezia, but does not clarify whether it is from Venice or not, as analisys on the main material do not say where it came from. As we are going to see on route S, near the Gallerie dell’Accademia another fantastic image is kept. Both glasses are decorated with small white dots that surround the entire frame, making it softer. This denotes a particular focus of Venetian manufacturers when making these objects: in about 250 years from the invention, it has not yet undergone any structural changes. 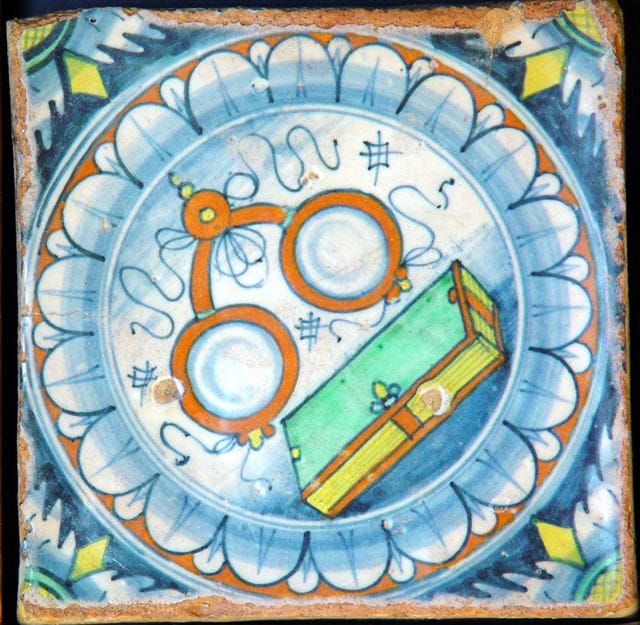 Looking closely at this magnificent picture, only one particular difference can be seen between this image and the fresco painted by Tommaso da Modena in Treviso, 1348: the two circles that hold the lenses have some bumps on the lower part; these are hooks that serve as a link to open the ring and insert the lenses.

They were then fixed with satin ribbon as we can see in another excellent representation which is located at Cappella Maggiore near Vittorio Veneto (TV), in the little church of the Holy Trinity called “The Mattarella”.

In a lunette of the vault representing the four evangelists, San Marco, holy patron of Venice, is represented, on purpouse, with a cabinet containing glass vases and a pair of glasses. 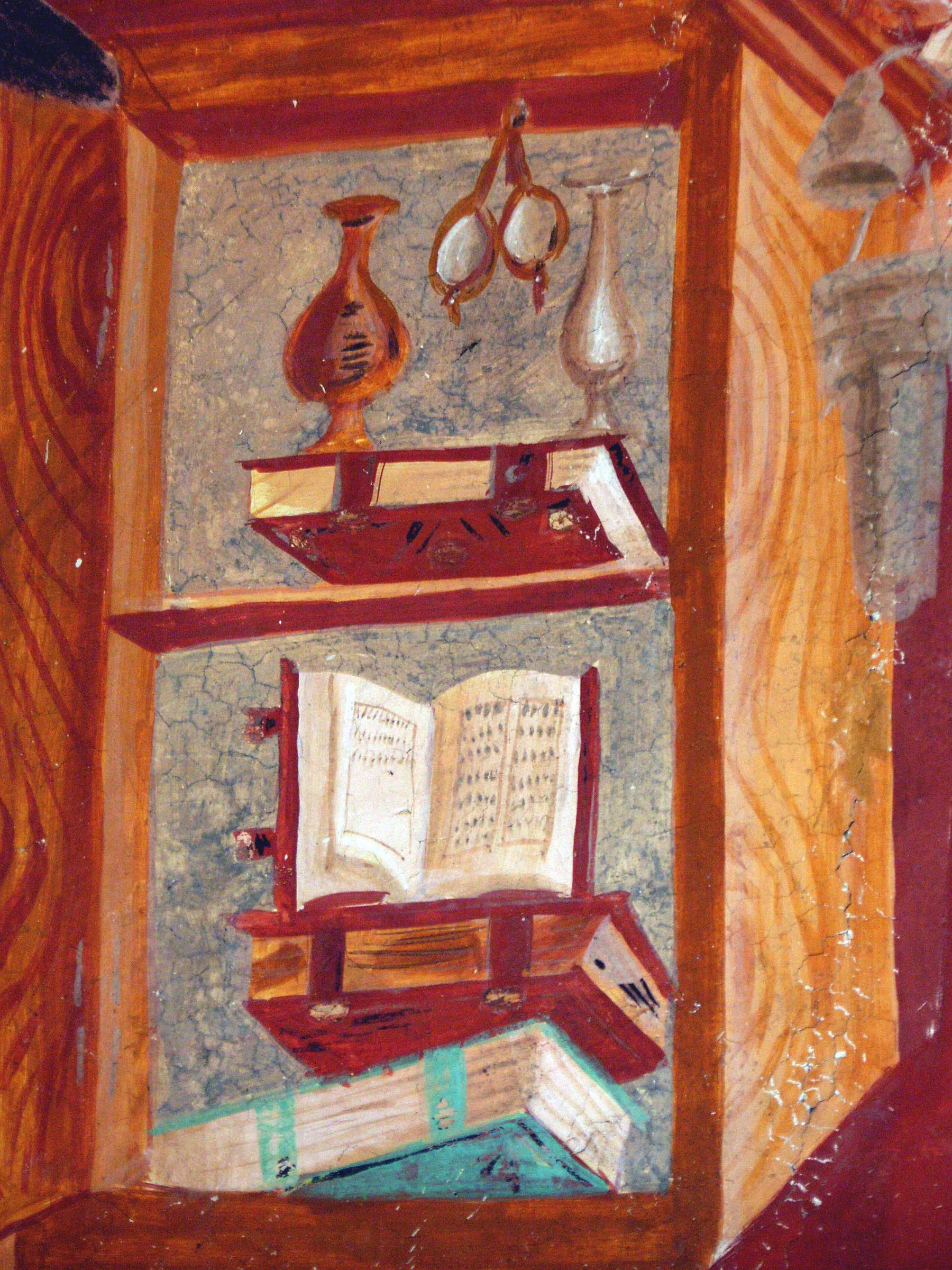 Our journey will proceed towards Rialto. At the end of Strada Nova, follow the signs to Campo San Giovanni e Paolo. Inside the church next to the hospital, there should be (the conditional tense is used because after two further visits and requests I have not found the object) a large bas-relief called “The Presentation in the temple” of Torretti, master of Canova.

Dr. De Lotto, in his book of 1956, entitled “From Nero to emerald glasses of Cadore”, photographed and reproduced one of the characters in relief, and included this sentence.

“I would be very grateful if someone was able to give any information needed to find the object. I recommend you to visit this site anyway, to discover the history of the Serenissima.”

Our journey continues to Campo Santa Maria Formosa. Those who had the chance to make a detour, just after the second bridge, towards Campo Santa Marina, you will be able to admire the exterior of Counts Van Axel’s Palace (nursery school today) on their right, where we have a piece of our collection from. 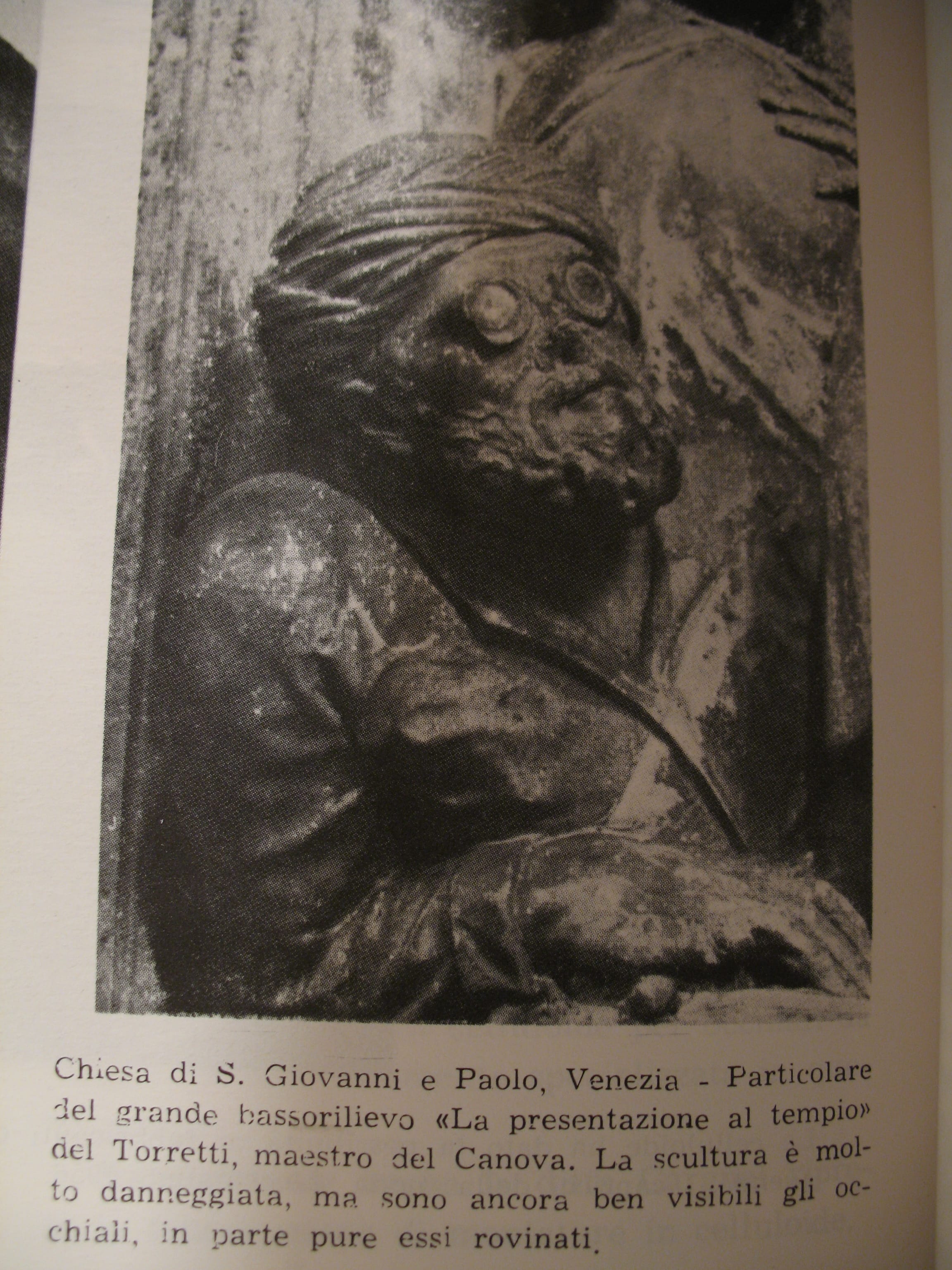 Since ancient times the Serenissima had started to trade relations with Dalmatia, on the opposite side of the Adriatic Sea, which had proved to be very important for the growing influence of Venice in historical and political field at the time. These relations became even closer after the entire Dalmatia passed under Venetian rule in early 1400. In Venice, the Dalmatian immigrants, also known as “Slaves”, gathered in brotherhood and the Dalmatian community, resident and transient, decided to erect at its own expense, the current school. As the Holy Patrons of the Dalmatian community were San Giorgio, San Trifone and San Girolamo, the school took the name of San Giorgio degli Schiavoni. 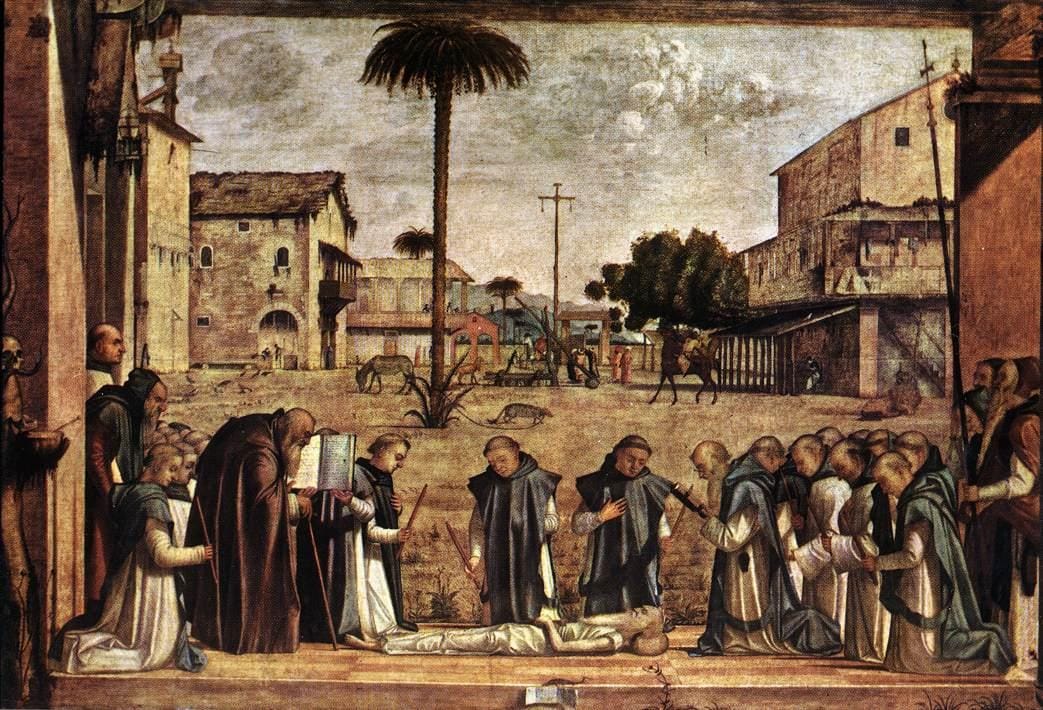